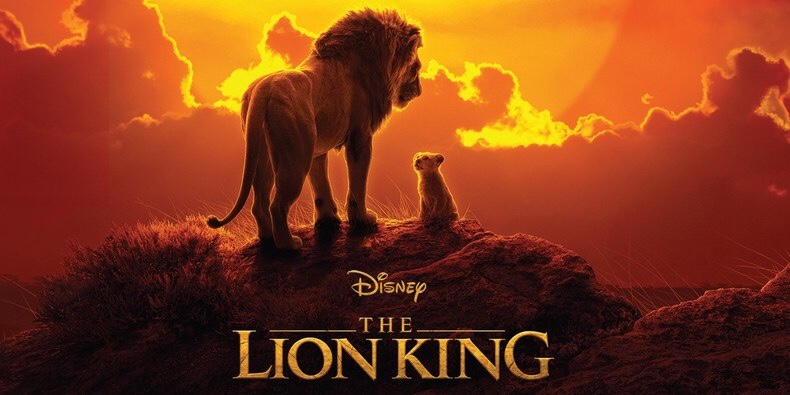 In 1994 Disney released their child friendly retelling of Hamlet which was filled with an unforgettably score, a range of lovable and whimsical animal characters and of course one of the most harrowing animated scenes of all time.

25 years later and The Lion King remains a firm favourite in the hearts of fans.
Over the years it’s had a number of sequels, a multi-award winning musical adaptations and now is the latest classic to receive a “live action” remake.

We went to see the new film opening weekend and seeing as there’s been so much hype surrounding it, we thought we’d share some of our thoughts.

My first issue with this film occurs before we even walk into the cinema. The thing I cannot get my head around is why a CGI film is labelled as a “live action” remake.
While yes the film does look more realistic or 3D than the original, I do not believe it can be called live action when every character was created by a computer. At least The Jungle Book has human actors working alongside the CGI animals.

Onto the film itself.
So the film begins with the iconic Circle of Life scene. The animals of the Pridelands all congress to Priderock to see the unveiling of the newborn prince, and I don’t think I could’ve loved this scene more if I tried.
It was exactly, moment by moment the same as the original. From the baby and Mumma giraffe to the scurrying mouse, no details were missed and my expectations were set sky high. It’s just a shame that once the dust had settled, I was left feeling incredibly underwhelmed by the rest of the film.

Obviously a remake should be exactly that, a remake and not a carbon copy, however in the rewording of this adaptation I couldn’t help but feel that some of the original magic has been lost in translation. While many, many iconic moments and lines remain, a number of my personal favourites are gone and seem to have taken the film’s sparkle with them.
Of course this is completely personal and your favourites may still be included, but a number of moments which, for me, define the original have been removed and replaced with moments which are, shall we say, less than iconic.

Now, I know you should never believe everything you read online, but I’d heard that He Live In You from the stage adaptation was due to make a cheeky appearance in this new film. To say I was excited is an understatement as this is one of my favourite theatre tracks and I couldn’t wait to hear what Disney had done with it in this new light.
Needless to say, this song wasn’t included, which is fair enough, but the only new song included in the film was Spirit from Beyonce. I mean, I get it. Could you imagine creating a film staring Beyonce and NOT giving her a song? Yes this song is enjoyable, but I don’t think it quite lives up to the epic nature of the original score, and it was certainly no He Lives in You! (Me, bitter? Never!)

I know I’ve been very negative in this post so far, but one thing I must applaud Disney for at the moment are their up-and-coming army of bad-assed females!
In Toy Story we had the new and sassy Bo, in Aladdin we had the empowering Jasmine, and now Disney are recognising the nature of lionesses. Many of us already know that in the wild it’s the lionesses of a Pride who hunt and provide the families meals.
It’s nice to see Disney actually acknowledging nature and giving Sarabi a more empowering and realistic role. Instead of lounging in the sun grooming her son, we’re told that Sarabi leads the hunt against the mangey and trespassing hyenas. It’s such a small moment, but to me it’s another huge step forward for Disney and their female characters.

While I do question why Disney feel the need to remake the films which are not only labelled as classics, but which are adored by fans all across the world, I’m over the moon to see number of the stories brought into the 21st century through small changes such as these.

This new adaptation of The Lion King is just as fun and just as tragic as the original, like seriously, I dare you to not cry during THAT Mufasa scene, but I couldn’t shake the feeling that something was missing.

As with all of the other remakes so far (with perhaps the exception of Aladdin), I’m just left questioning whether a remake could ever live up to the standard of its original.

To once again quote my main man, if it’s not broke, why fix it?

Have you seen The Lion King yet? I’d love to hear your thoughts! To join in with the conversation you can either comment below, Tweet us or head to our Facebook page to leave a comment!

To read our thoughts on some of Disney’s other recent releases check out the below posts.
Aladdin
Toy Story 4